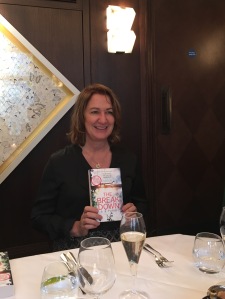 I had the pleasure of first meeting the lovely B.A. Paris at an author event last year. At that time I had just released my debut, The Sister, while hers, Behind Closed Doors had been out for several months. We bonded over our shared experience, our genuine bewilderment of both finally being published later in life and having No.1 Bestsellers and have championed each other throughout the process of writing our second tricky novels. She was thrilled for me when I published The Gift before Christmas and it shot to No. 1 and I was delighted to be able to join her at The Ivy Club yesterday to toast the launch of her second novel, The Breakdown, which is already soaring up the charts.

It was lovely to catch up with old friends and make some new ones, over one of the most delicious meals I have ever eaten. But first lets talk about the book.

The Breakdown is good. Not good in a ‘my friend is the author so I’m obliged to say that’ good, but ‘I started it last night, couldn’t put it down and have just finished it,’ good. From the opening chapter I was gripped by the story of Cass, a woman who is driving home late one night and passes a car that has broken down. There’s a raging storm, isolated countryside and I could feel Cass’s anxiety as she tries to decide whether she should stop and help, worried she could be putting herself at risk. Eventually she decides to drive on, a decision that ultimately haunts her throughout the rest of the book as the driver of the broken down car is found murdered and Cass has a creeping sense of unease throughout the story that she might be next on the killer’s list. The tension builds and builds throughout the story and anyone who loved Behind Closed Doors (and with over a million sales there’s rather a lot of people who did!) should love this story too.

The launch lunch itself was intimate, in a private room at The Ivy Club. I ate mixed beetroots with whipped goat’s curd, mixed seeds and moscatel dressing, followed by macaroni cheese and I finished with a cheeseboard. We drank champagne and red and white wine and chatted about books and writing. Being an author can be such a solitary existence sometimes, I really do treasure the time I get to spend with other writers. 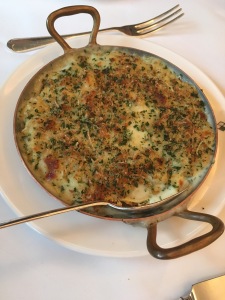 The Breakdown is the WH Smith Book of the Week which I know B.A. Paris was very excited to discover, her ambition has always been to be able to visit a W H Smith’s store and see a copy of her book. The demand is so high W H Smith’s do keep selling out! As well as in all good bookstores you can also buy The Breakdown on Amazon UK here or Amazon US here and follow B. A. Paris on Twitter here.

The Life We Almost Had Publication Day!