Last month I coped with my son leaving home by sending him off to uni with 3 important things (you can read that post here). I spent the first few days of his absence drifting sadly around the house. It was when I lit a candle in his bedroom I knew I had to get out and do something productive so I dashed to Asda to stock up on chocolate. When I arrived I reminded myself how well I was doing on my sugar free diet, how much better I felt and so instead of a bar of dairy milk I headed into the in-store travel agent and bought a holiday to Lanzarote instead (and it was fun explaining that impromptu purchase to my husband).

Days later myself, my youngest son and my husband were on a beach. It was an odd sensation, trying to relax. It was the first time, in a long time, I hadn’t had a looming deadline from my publisher. I deliberately hadn’t packed my laptop, instead I’d taken a stack of books and I intended to read *whispers* for pleasure.

Historically I used to read a couple of novels a week but in the last few years I’ve been so busy writing my own books there’s been little time for reading. On the occasions I’ve managed to snatch precious minutes from my day, I’ve ended up reading one of the huge pile of proofs in my study awaiting quotes which all tend to be psychological thrillers as that’s the genre I write in. On my break, I was determined to read something different, and I did.

The One With Hidden Depths – First on my list was Graham Norton’s cozy crime debut ‘Holding.’ I’ve long been a huge Graham Norton fan. I pre-ordered this the second it was announced but I’ve been putting off reading it because… if I’m honest, because I thought it might not be very good. Sorry Graham.

I dove into the pages expecting them to be peppered with brash humour, outrageous jokes, which I wasn’t sure how would translate into a novel, but what I found was a gentle story set in rural Ireland, sensitively written by someone who knew his characters inside out. The gradual unfurling is slow but I like that in a story. There’s a depth to the characterisation you rarely find in debuts. So much so I googled whether Graham had a ghost writer, apparently he didn’t. There’s a vulnerability surrounding the small community featured in this story, that doesn’t come from the characters alone. I’ve since bought Graham’s second novel ‘A Keeper’ and I won’t leave it too long before I read it.

The Chilling One – Next up was ‘The Taking of Annie Thorne’ by C.J. Tudor. As a teenager I was a real horror buff and a big fan of Stephen King but as I’ve got older I’ve… I’ve grown into a bit of a wuss  I suppose and so I tend to shy away from the genre. That said when Steven King recommends a writer you sit up and listen and that, along with the fabulous cover, swayed me into putting on my big girl pants and diving in. Goodness. This book is creepy. Right from the start a sense of unease settled over me, despite my brilliant backdrop of blue skies and golden sands. This story is so atmospheric with a refreshingly unique voice. I do love it when I start off loathing a character but the writer gradually draws me in until I’m rooting for them. I’m glad I didn’t read this alone at night, but I’m so very glad I read it.

The Weepy One – A writer friend of mine recommended ‘Bitter’ by Francesca Jakobi to me and told me I’d love it, and she was right. I find it utterly fascinating when a story is based on some semblance of truth and this one, based on Francesca’s grandmother, drew me in completely. It could have been hard to picture a time when divorce was scandalous and single parent families an oddity but thanks to the evocative writing I was right there with the beautifully crafted characters, living out their obsessions with them. This book is thoughtful, heartbreaking and utterly compelling. I am desperate to know what happened after the final pages.

Aside from reading, it was a fabulous holiday which kicked off to a thrilling start when we popped into WH Smith’s at the airport and found ‘The Surrogate‘ on the shelves. Once we’d arrived, we hired a car but didn’t explore this gorgeous island nearly enough which is a good reason to return (although we did stumble across a fabulous bookshop who stocked ‘The Sister‘ – hurrah!) What we did do in-between reading was wade into the sea to feed the flurry of fish with cooked vegetables we saved from lunch.

We also went sea trekking for the first time. Walking around the ocean bed while hooked up to air was an odd but amazing experience and a privilege to be up close to so many sea creatures in their natural habitat.

Evenings found us at a beach bar, sipping cocktails and watching the sun set. 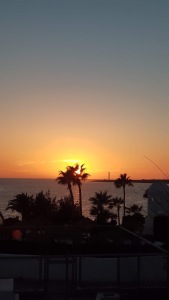 It was while gazing out to sea I had an idea for a romantic novel I felt ridiculously excited about but within 48 hours of being back in the UK I’d (fictionally) killed someone. I feel relaxed, refreshed and ready to put the finishing touches to my fifth psychological thriller, and as for writing romance? Maybe one day…