It had been 17 years since I last visited Paris. My youngest son had never been, his older brother only had sketchy memories. We were due a holiday and wanted something different – a city break. All being creatives, Paris had to be that city. We spent months researching the arrondissements, the tourist attractions and the places we could visit off the beaten track. We decided on an apartment rather than a hotel, wanting to experience a tiny bit of Parisian life, drinking coffee on our own balcony, overlooking the rooftops. Our train to London was booked, along with the Eurostar. I devoured novel after novel set in the City of Light. I was immensely excited, nothing could spoil our trip.

And then the Coronavirus hit.

We were part of a visit Paris group on-line – everyone remained upbeat – nobody was going to cancel – cases in distant countries weren’t going to deter people from travelling. But then the virus escalated and suddenly the countries affected weren’t too distant and after an outbreak in Italy it was only a mater of time before it spread widely in France. People began cancelling their trips, should we?

Two days before we were due to leave The Louvre was closed with warnings that more attractions would follow. A hotel of tourists in Tenerife was quarantined. We were concerned, not solely because of the virus but because we didn’t want to be stuck overseas. My son had to be back at uni on time for assessments otherwise he might have to repeat his second year.

The day before we were due to travel there was a massive rise in cases in France. I rang my insurance company, would they cover us if we didn’t travel. They wouldn’t. Rather than excitement about our impending trip, all I felt was a sick dread. Was I putting my children in danger? What should we do? On the morning of our departure, we were still debating. In the end we decided to risk it and hope for the best. Hurriedly I packed, clothes for rainy days, layers for the chill and plenty of things to do in case we were quarantined. Our journey was uneventful, no health checks were made or questions were asked when leaving our country or entering France,

On our first day I was anxious, we decided to have a calming wander around the city. I had a loose itinerary but knew from past experience the best way to enjoy Paris is to follow your feet and see what you stumble across, around every corner is a joy to discover.

We stepped out into the glorious Spring sunshine and meandered past the stunning architecture, sharing a smile. We were here! It was okay! Before long we spotted signs for a museum. When we got there it was closed, the sign on the door was in French but we understood the heading in thick, blood letters ‘CORONOVIRUS’ we turned away, just as a group wearing face masks passed us. It was sobering. Again I wondered if we should have stayed at home. The streets were quieter than usual. On the bridge a man coughed and visitors skirted around him, however there weren’t nearly as many people wearing masks as I thought there would be, most people weren’t.

A handful of attractions were closed because of the virus but there is so much to do in Paris it didn’t matter. As the days passed we (I) grew more relaxed. The city wasn’t crowded, it was always possible to get a table in a cafe. There were no queues anywhere, not even at the Eiffel Tower or Musee D’Orsay. It was Paris like I’d never experienced before and likely never will again.

In retrospect I am so glad we didn’t cancel our trip but that’s no judgement on people who do. Face masks and fear are things you shouldn’t have to content with on a vacation. Paris will (should) always be there, hopefully the virus won’t.

We crammed such a lot into our week, far too much to share but these were our highlights: – 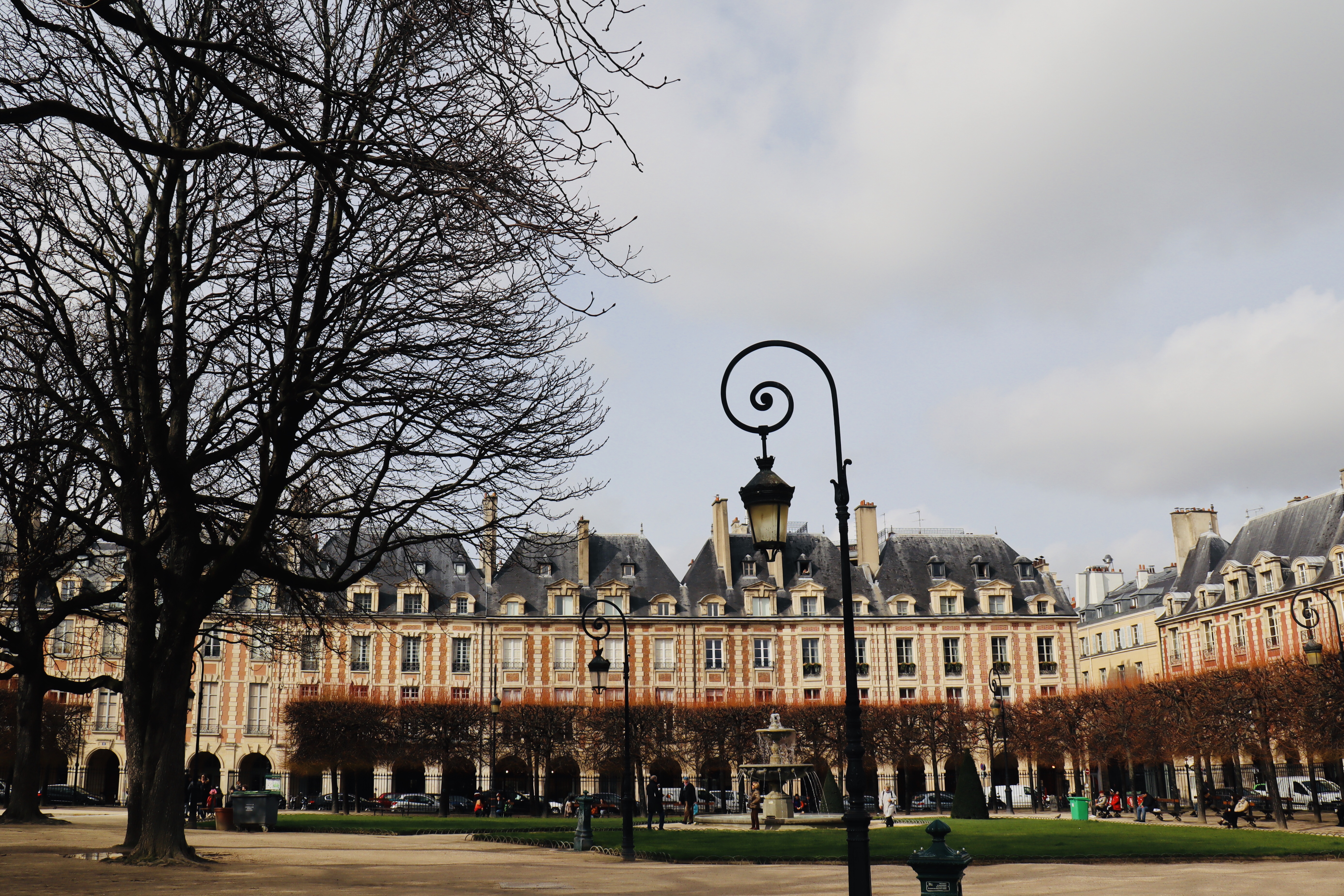 Place de Vosges – This is the oldest planned square in Paris. The writer, Victor Hugo lived in one of the gorgeous houses here. It’s so tranquil it’s like stepping back in time. There are some amazing galleries and boutiques lining the square as well as the bookshop in Hotel Sully. 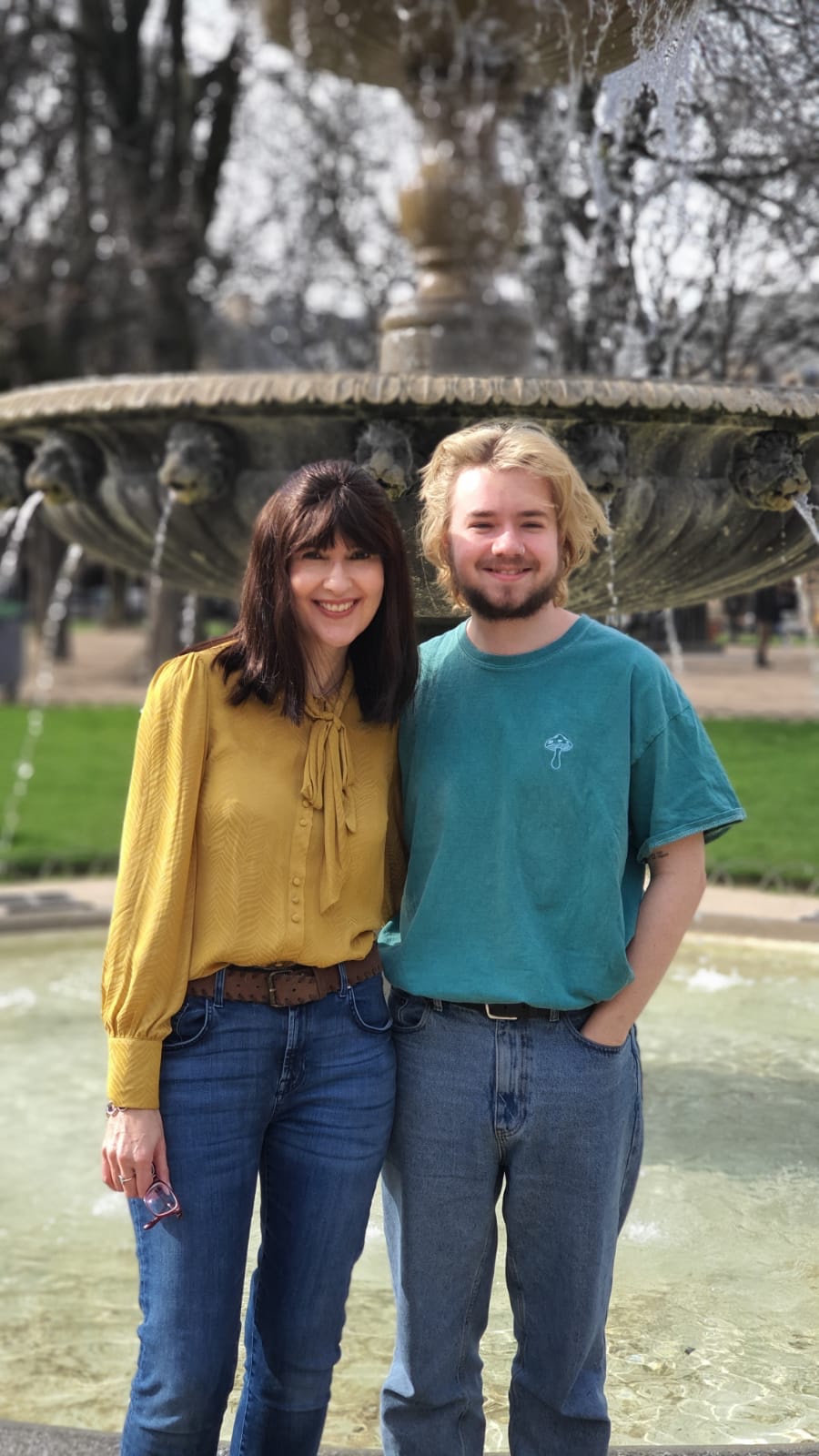 J J Leto is the best busker I have ever seen and definitely one of my favourite things. The second we saw him we settled ourselves on the pavement and listened to his entire set before buying one of his CD’s. It’s the unexpected delights that often make a trip. This was one of them. 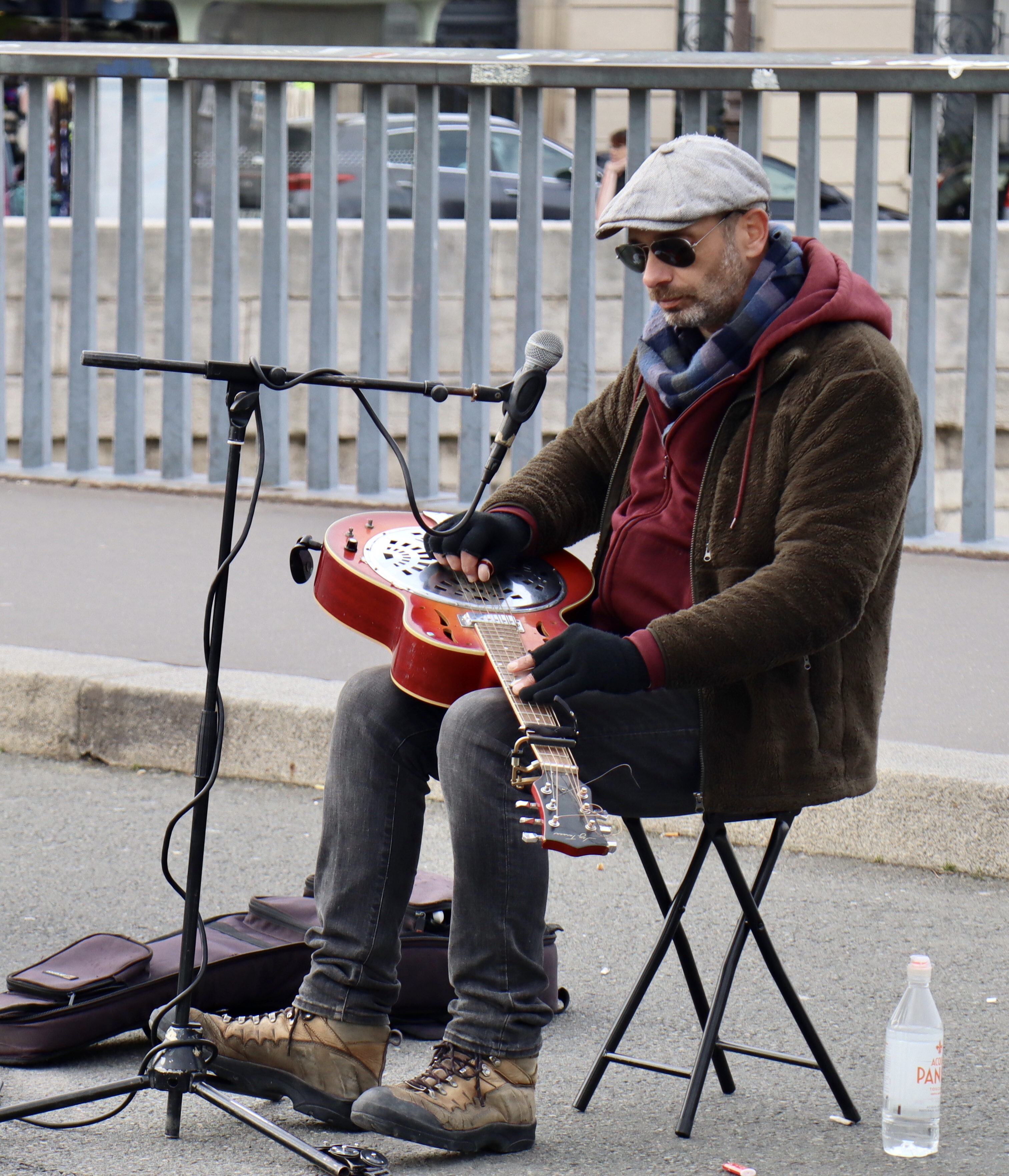 We wandered along the river and ended up at the Luxembourg Gardens which was a very pretty oasis away from the hustle and bustle of the city. 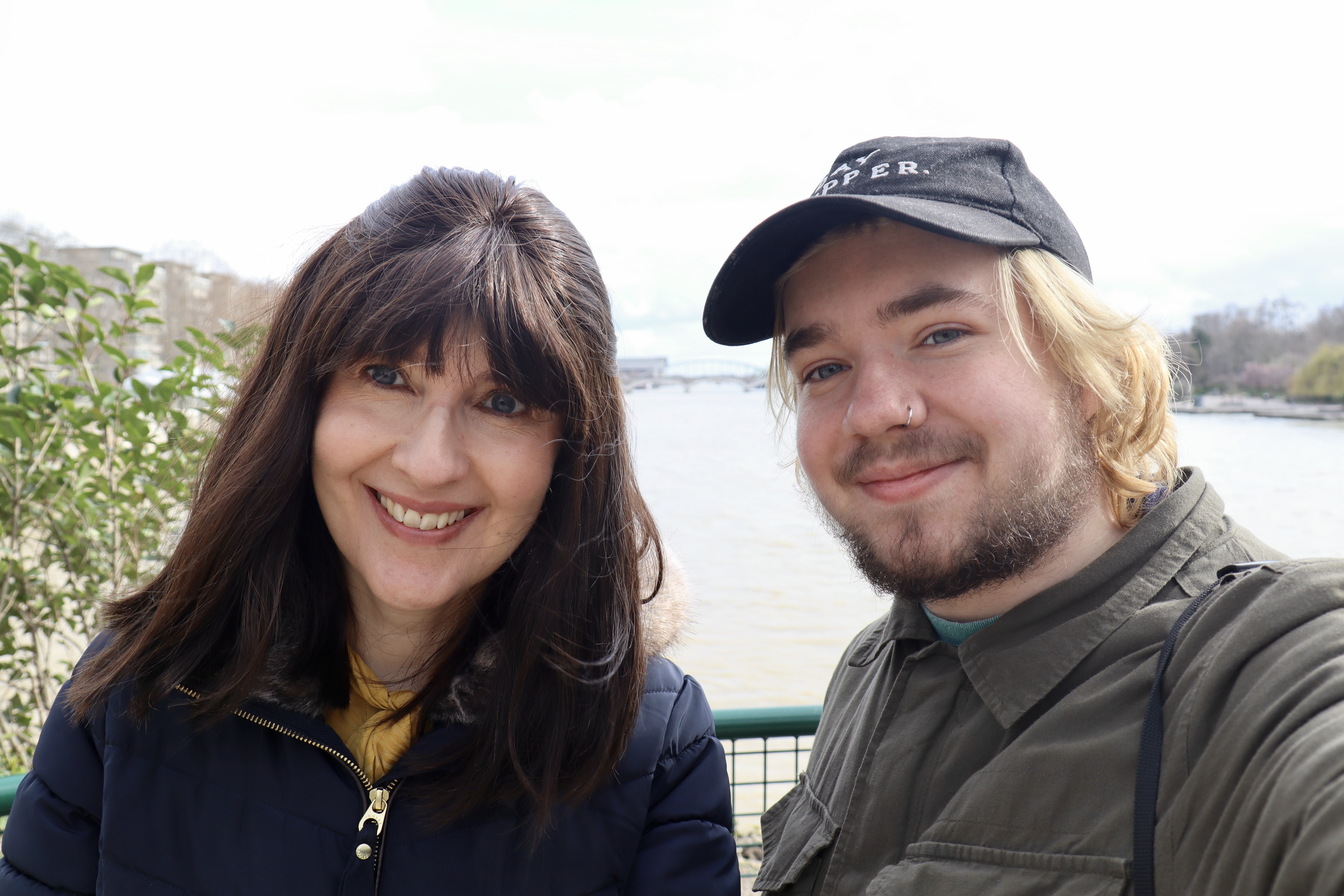 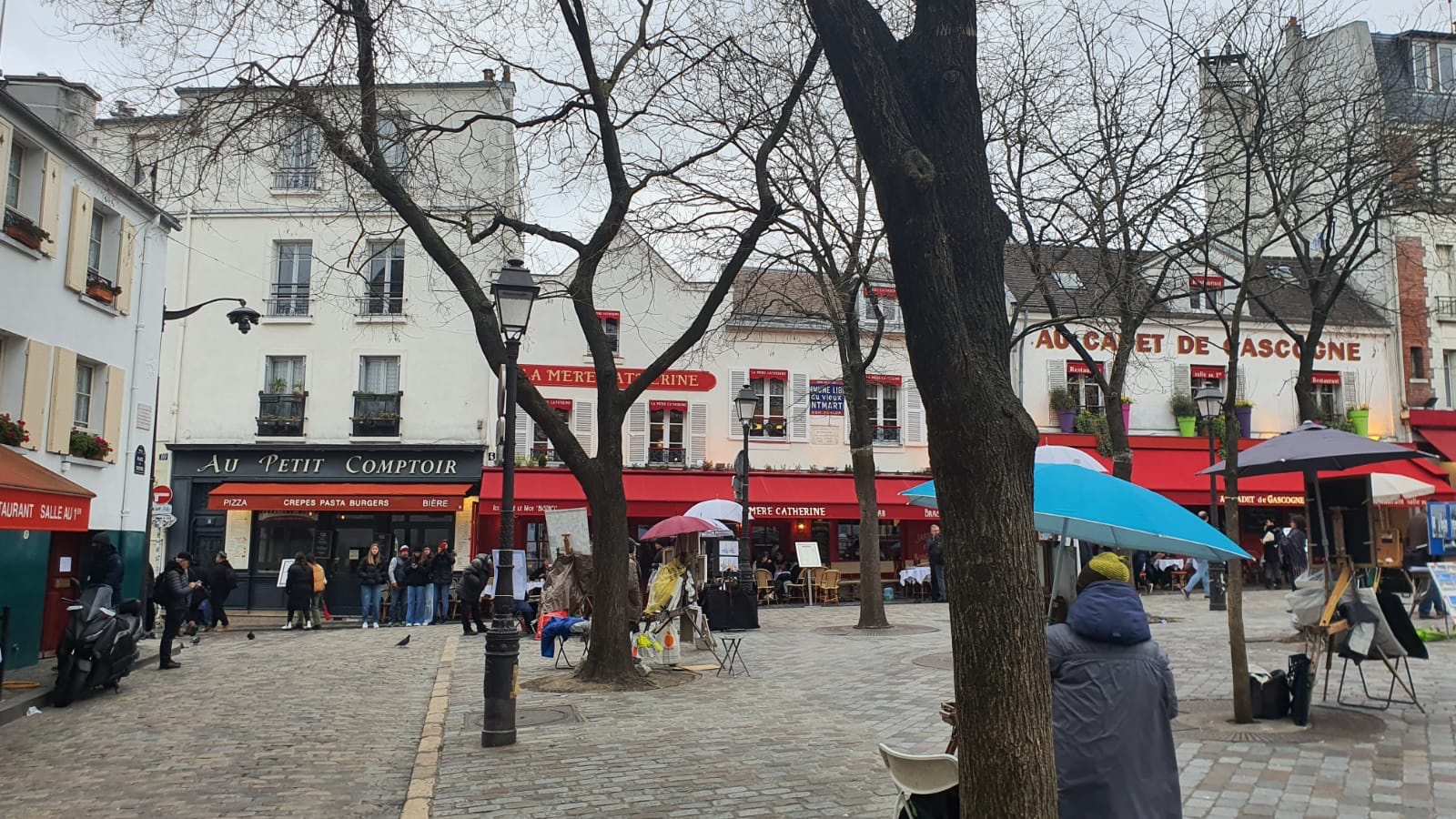 Montmartre is one of my favourite places. I love the street art and the galleries. We visited the Montmartre Museum and I was thrilled to try the swing featured in Renoir’s ‘The Swing’ painting. The Sacre Coeur is stunning and the views across the city are breathtaking. 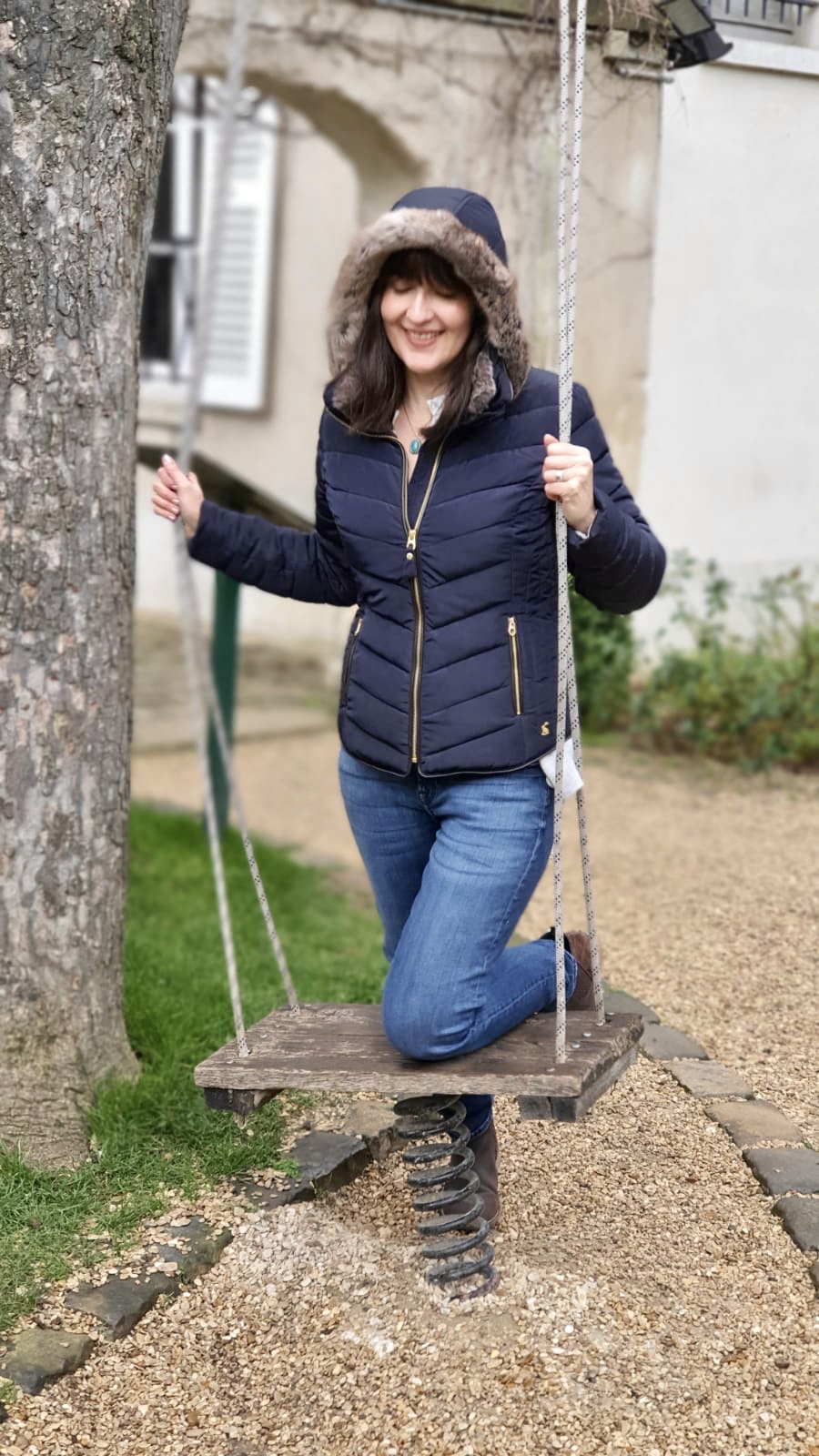 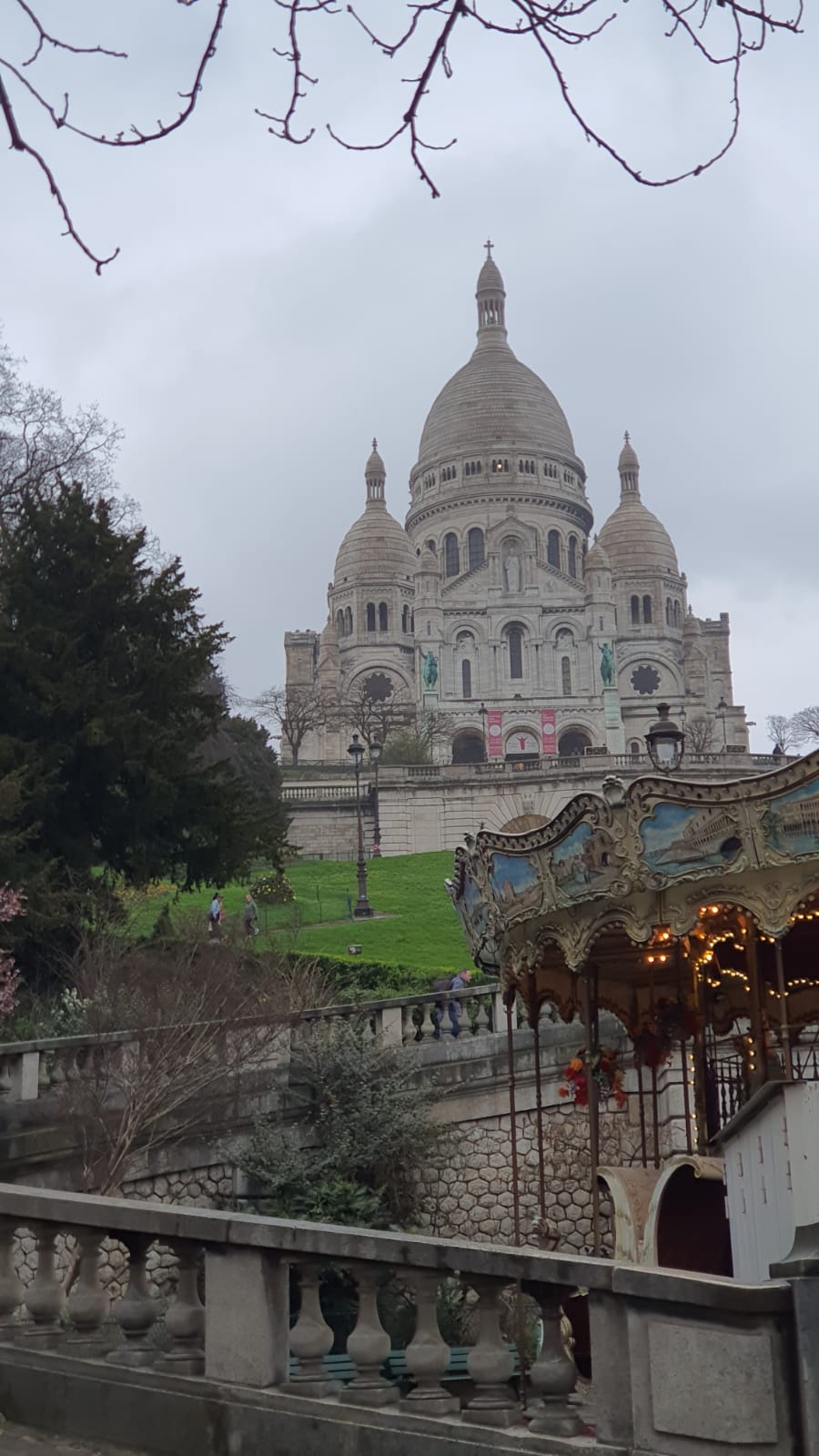 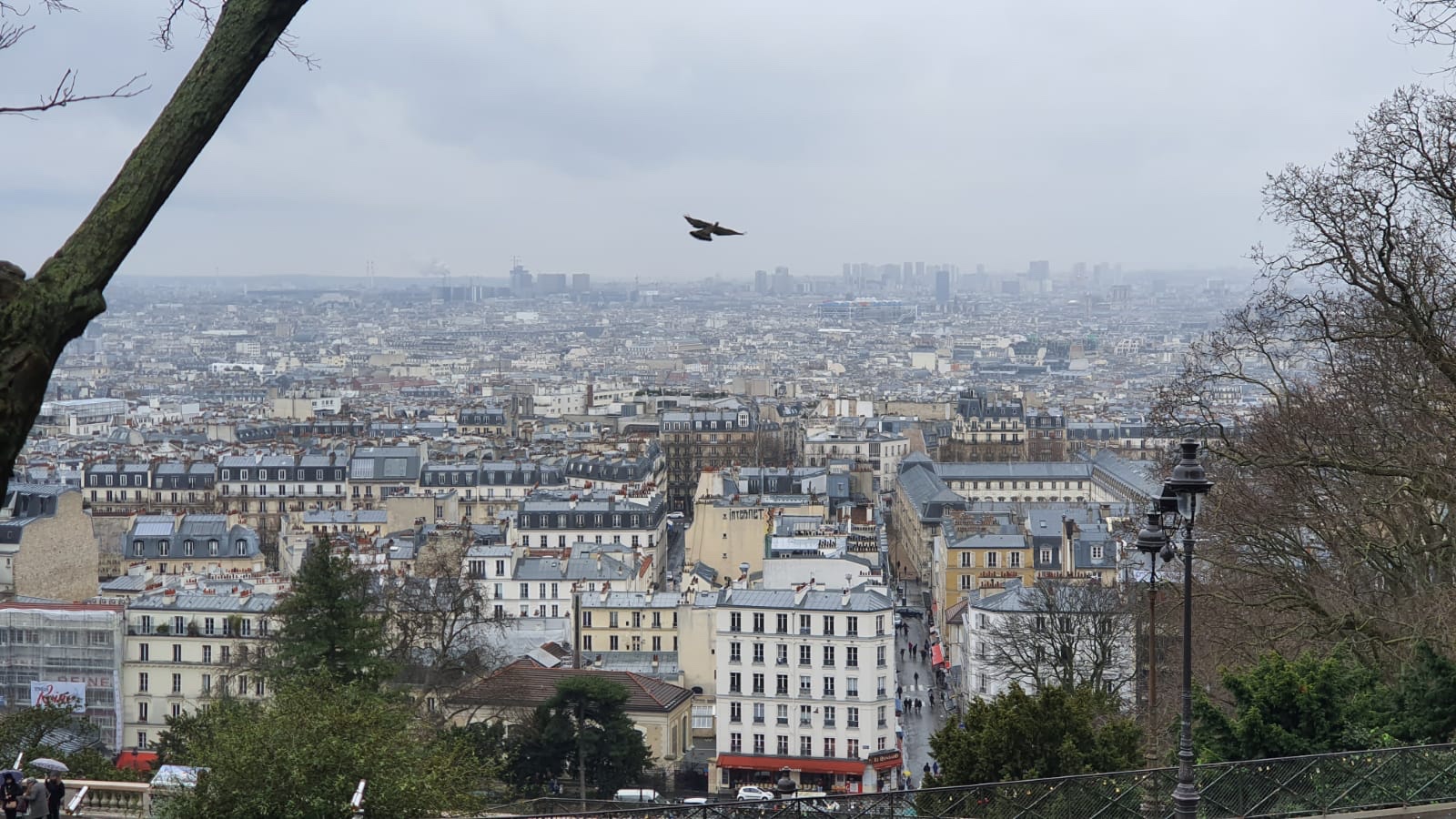 I’m a bit of a stationery obsessive so Melodies Graphiques was a real treat. I came away with bags of handmade paper, a dip pen and ink vowing to write everything the old-fashioned way from now on. Expect my next book to be ready in about 2029… 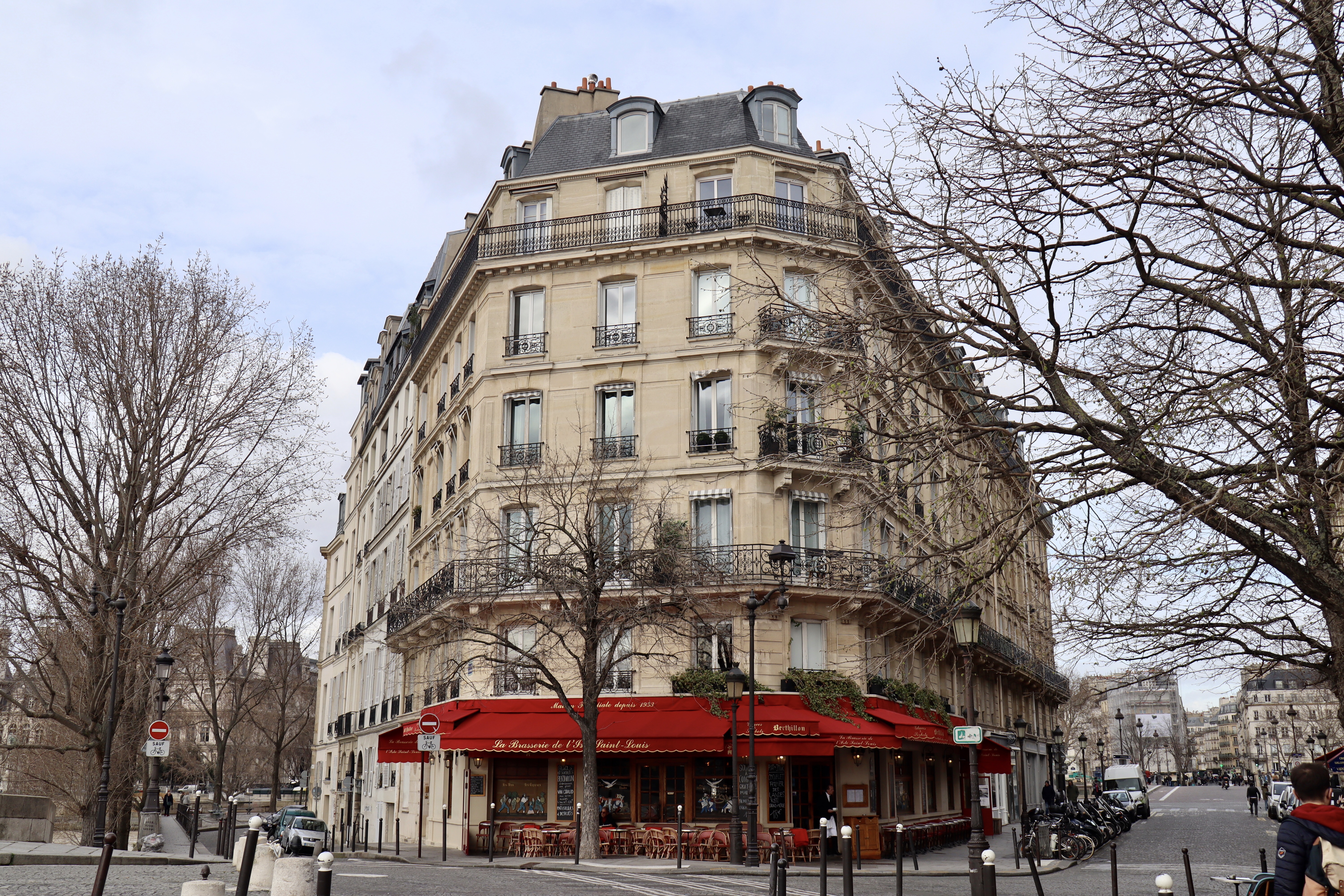 We were lucky that in between the torrential bouts of rain it was warm enough to sit outside at the cafes, soak up the atmosphere and eat a waffle or two. 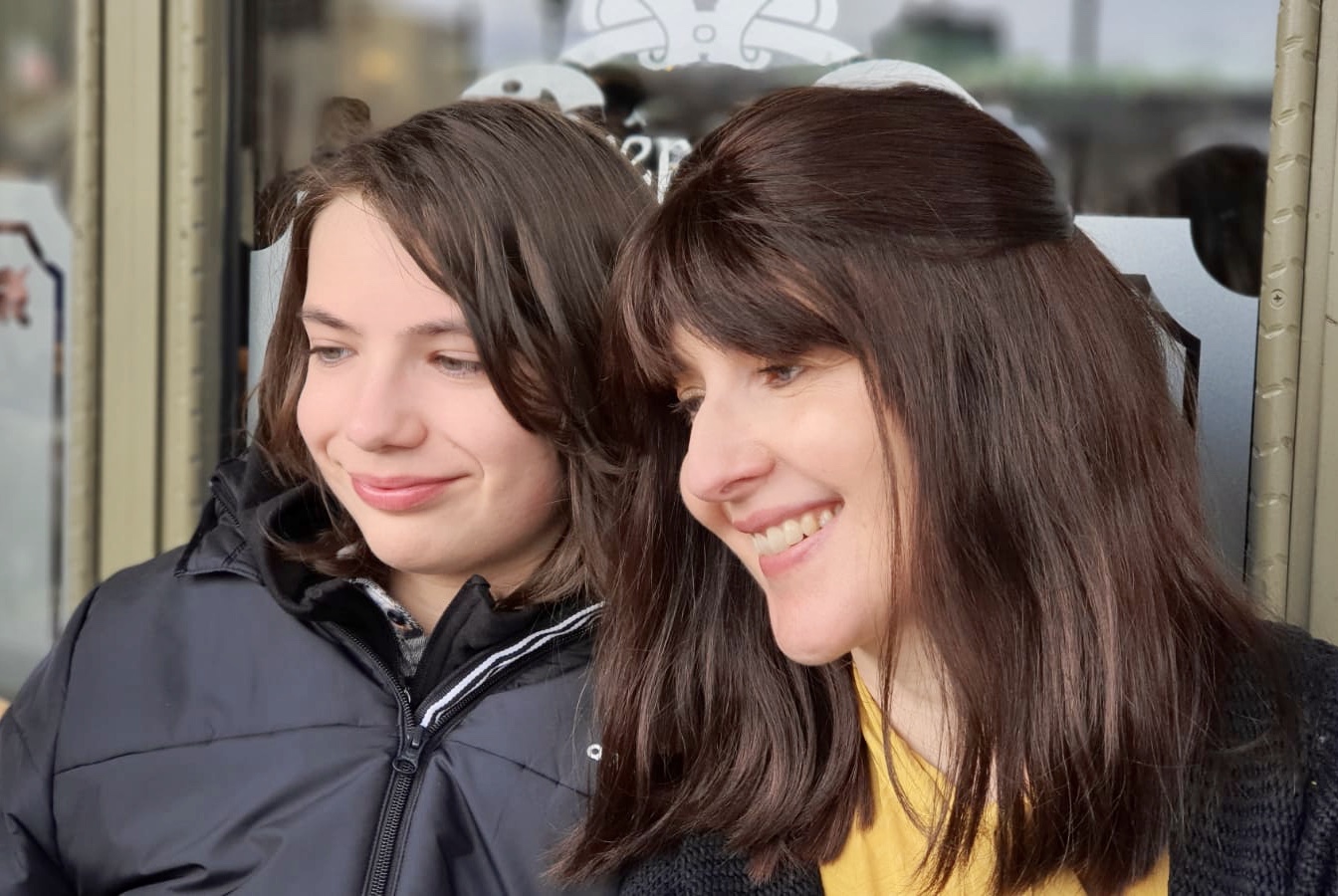 The Eiffel Tower offers such sweeping views it’s great for a photo opportunities. For the best view of the tower head over to the Trocadero and of course, go back at night to see it illuminated and watch the light show that sparkles every hour. 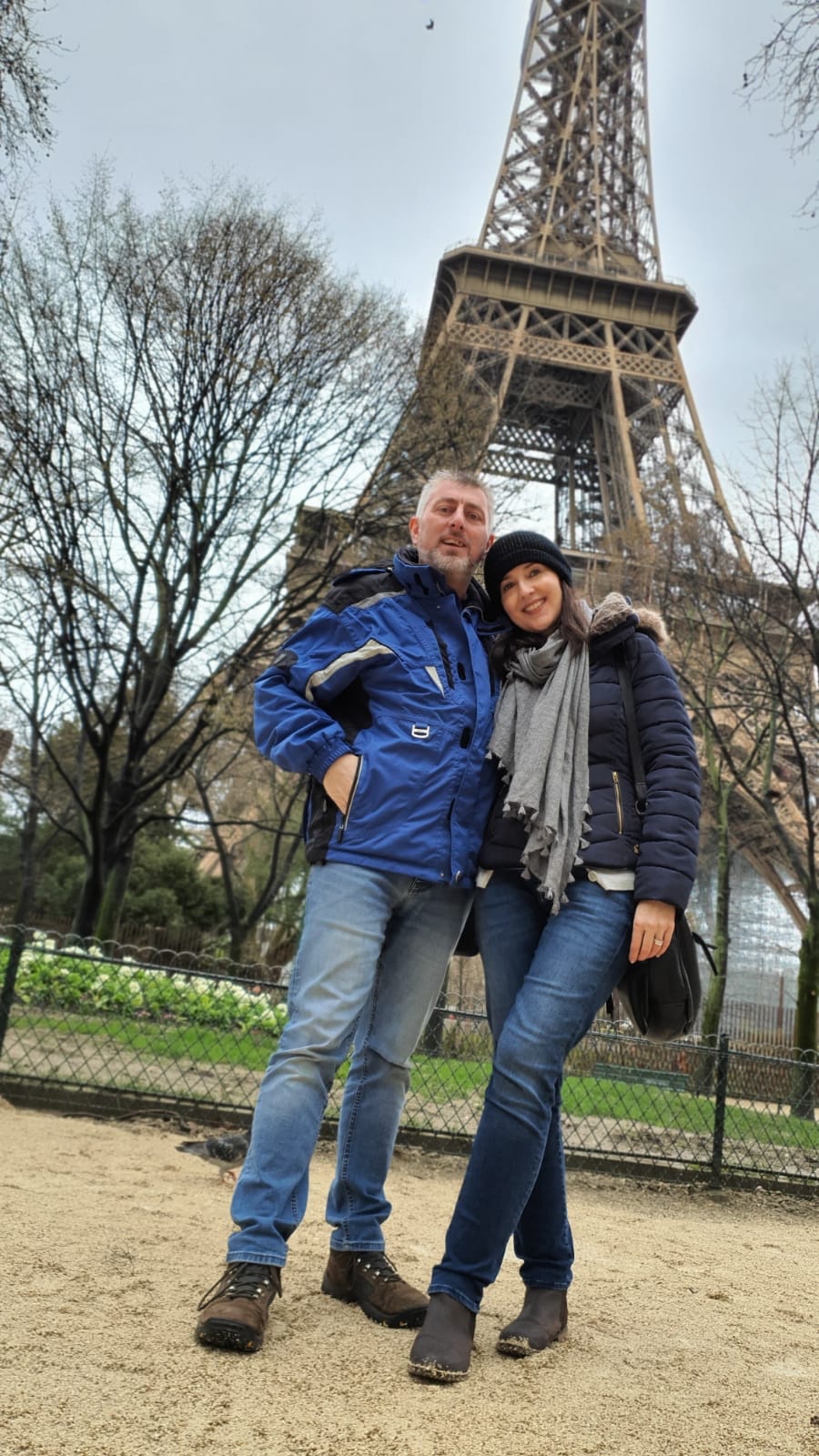 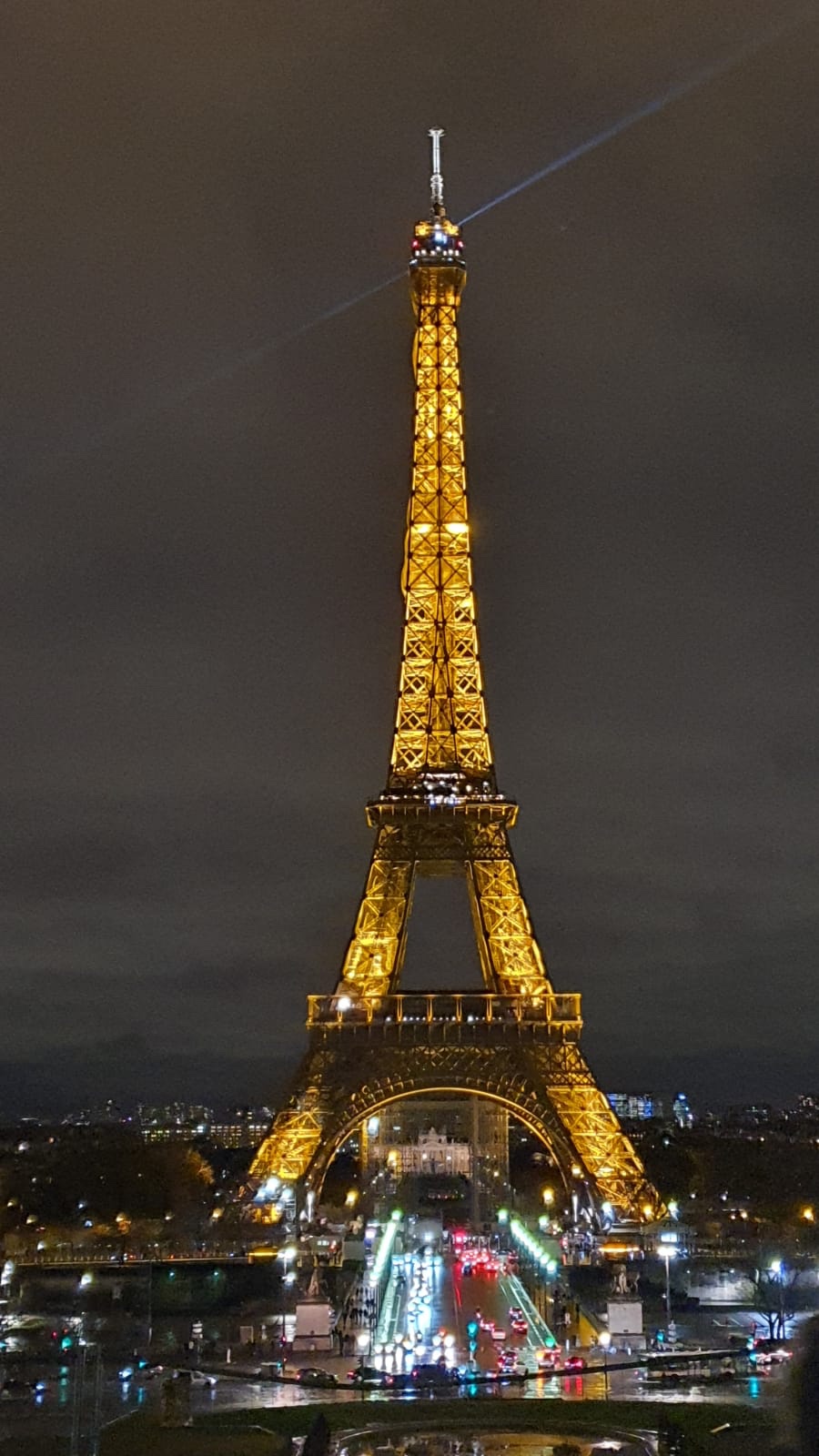 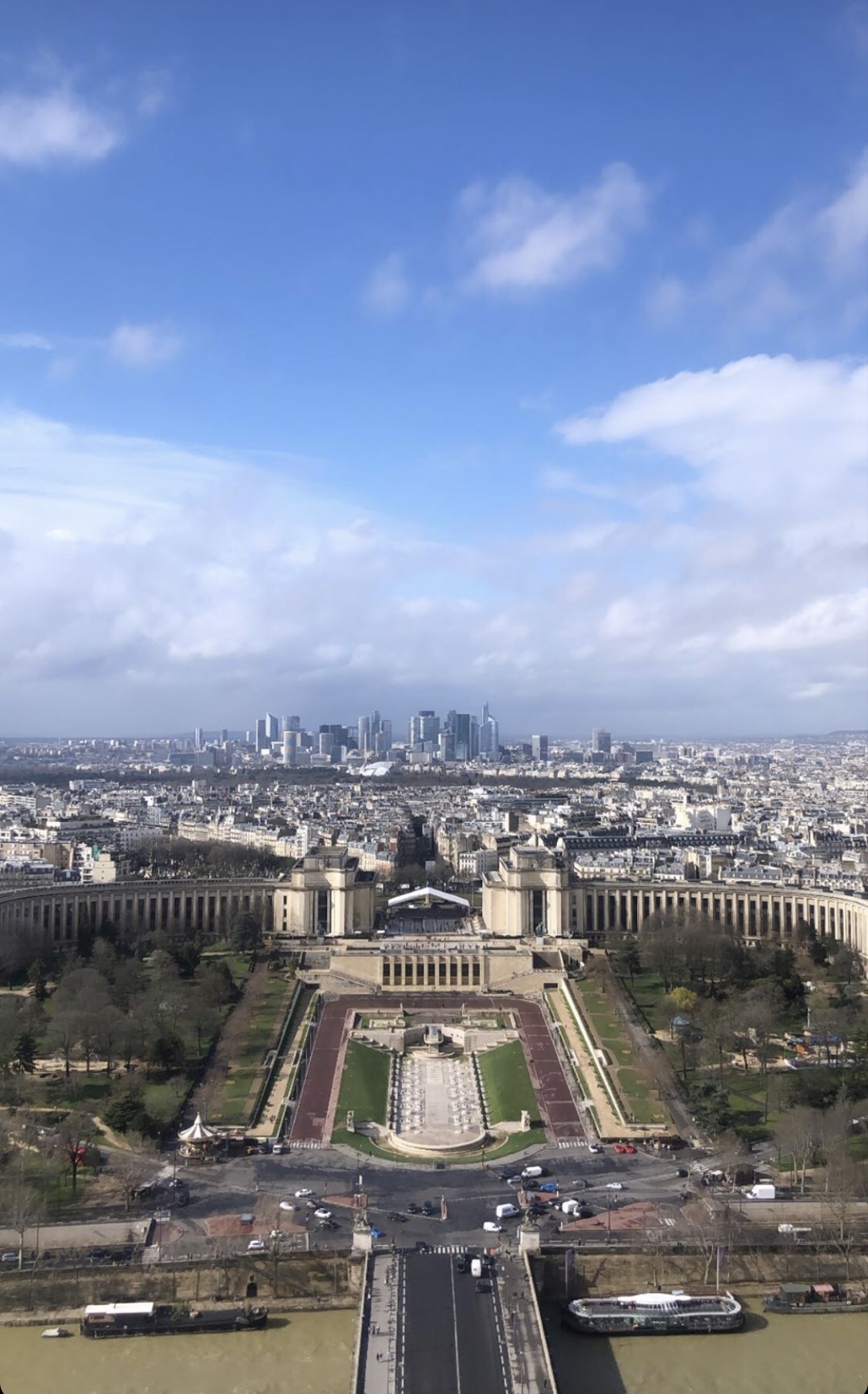 I’m such an art lover but I knew we wouldn’t have time to see all the galleries and so I chose carefully. The Musee D’Orsay did not disappoint. I became quite emotional to see paintings I had admired for years via books (including Renoir’s The Swing – I think I’d nailed it.) 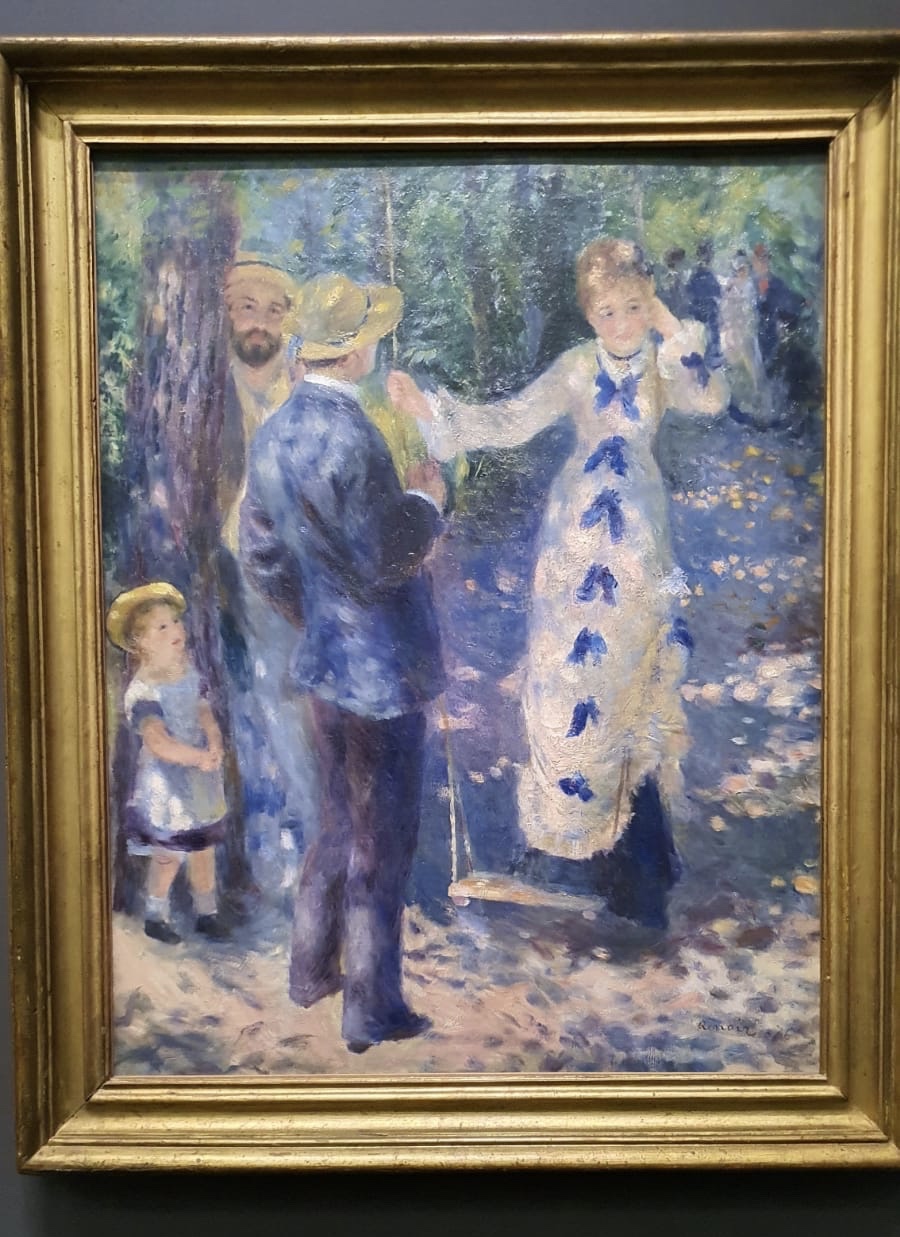 The French were so friendly. I greeted everyone with a happy smile and a ‘Bonjour’ and received the same in return. The food was heavenly – we didn’t have a single bad meal although sometimes we had to try several restaurants before we found a vegetarian option.

We would avoid – taxis – we sat in traffic for so long the first day we didn’t bother again. The metro is simple once you’ve done it once and there’s always someone who will help you out.

We came away laden with wine, cheese and chocolate; many happy memories and a love for the city. Paris – we shall see you again soon! 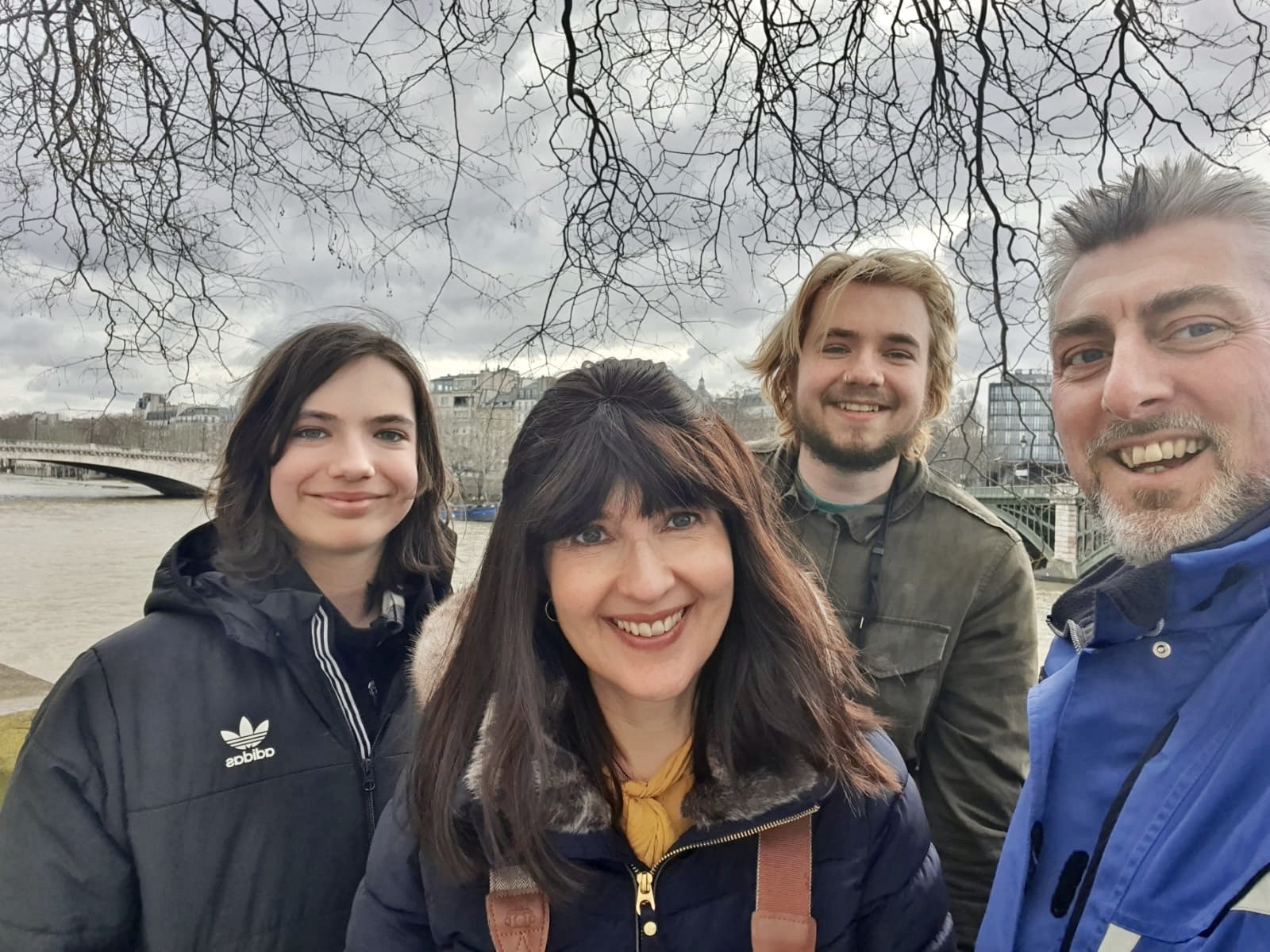 Lastly, a few words about disabled access. I have compromised mobility and although I didn’t take my wheelchair I was heavily reliant on crutches. I have walked more this week than I thought was possible (and am paying for it heavily!) The French are super conscious and considerate of anyone disabled. Each time on the Metro I was offered a seat. Had there been queues at attractions I could have skipped them if I’d asked at the front of the queue. There are a lot of stairs in the city. Some avoidable. Some not. The Sacre Coeur has a few hundred but you can avoid most (there are still some) of these by riding up in the Funicular (which is free with a metro pass). The Pantheon had a ramp. Most restaurants and cafes unfortunately have toilets downstairs. There are very few lifts in eating establishments. Most metro stations don’t have them. There are many toilet facilities scattered around the city which I think should fit a wheelchair in. Some of the larger places (The Musee D’Orsay for example) have wheelchairs which you can borrow. 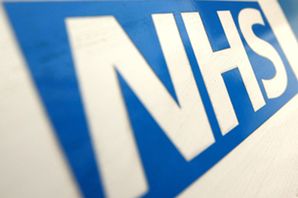 A drastic change in my health around ten years ago sent me spiralling along a path of limited mobility and chronic pain. Raw and reeling, my mental health plummeted and subsequently I plunged into clinical depression. It was a dark time which left me feeling unable to care for myself, or my three children.

My local hospital didn’t know how best to help me and so came a frustrating and emotionally draining year of researching treatments that might help me (I found one) and then trying to get my local authority to fund it as it was outside of my local town (eventually they did).

For around the past eight years, every now and then,  I’ve undergone this quick, simple but life-changing procedure and I am so thankful for the NHS for the time and care I have been privileged enough to receive so far. Alongside this I have paid for my own physio (I didn’t get long on the NHS lists) and I’ve done everything I can possibly do to take responsibility for, and improve my health. Today, I can potter around the house, drive, nip into shops, go for short walks, my pain levels have drastically reduced and my quality of life has greatly improved. I feel like a real hands-on mum again. I no longer need to take daily medication which had been causing me horrendous side effects. Although I still use crutches sometimes and my wheelchair for days out, when I think back to ten years ago when I was unable to stand unaided or get myself in and out of the bath, my life is unrecognisable. For that I am very grateful.

Returning to the hospital last Thursday I was shocked and dismayed to be told, through no fault of the team, that due to NHS funding cuts the hospital would no longer be offering this treatment.

This post isn’t a self-pitying one – government cuts have affected most of us in one shape or form- but rather a way to unpick the tangle of emotions I am feeling right now.

Today, thanks to the improvements to my health I can work full-time. I don’t claim disability benefits, there isn’t enough to go around and there are people worse off than me, that I know. I am in the fortunate position where I work from home, make my own hours. I can change positions if my pain gets overwhelming, I can go for a lie-down when I’m feeling exhausted, I can even skip the odd day and stay in bed during bad flare ups. This I could not do in an office but I worry now, that without this relatively simple treatment, my mobility will likely decline again, my pain increase, my mental health suffer and the thought of losing my financial independence if I am no longer capable of working is a frightening thought indeed.

Slashing funding and impacting upon people’s health will surely cost more in long run; potentially driving people out of work, onto benefits, increasing the need for medication, pain killers, anti-depressants, the already flooded waiting lists for counselling will creak under the strain, and then of course there is the need to treat the often horrific side-effects these drugs can cause.

And this is what I am struggling to make sense of. The logic behind it all.

I really don’t know what the answer is. I don’t feel I am more entitled than anyone else. All I do know is at the moment, my world, the world, seems a scary and uncertain place.