I am absolutely thrilled to be able to share the announcement that after selling more than half a million copies and being published in 16 territories The Sister will be available in retailers from 24th August, published by Sphere.

Bookouture have done such an amazing job with my debut digitally and it’s a privilege to now also be working alongside the Little, Brown Book Group. It’s hard to stop staring at my gorgeous new paperback copies, fiercely guarded by the little brown bear my husband bought me to celebrate. Granger was overjoyed to have been given a chew while the humans in the family toasted with champagne. 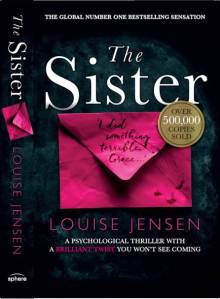