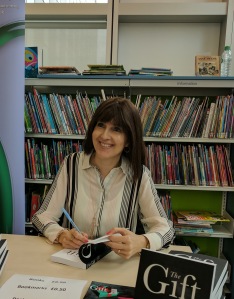 Exactly a year ago was a dream-come-true- kind of day. I remember snapping awake, brushing the sleep out of my eyes, instantly my stomach swirling with excitement and nerves. It was publication day for my debut novel The Sister which was already receiving rave reviews and flying up the charts. I had a fabulous publisher and a contract to write two more novels. My lifelong ambition was realised as I smiled for the camera and held my paperback tightly in my hand like the precious gift it was. It stands to reason I lived happily ever after, right?

Yes. But it took a while. 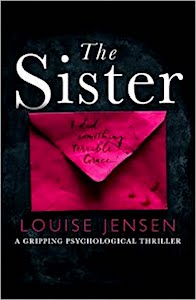 Initially it was the cause of much excitement to type my name into Amazon and see my book spring onto my screen but still I didn’t feel like a writer. I was so thankful to have a deal but part of me thought it must be a mistake, it couldn’t possibly last. I clung on to my old job title when introducing myself to new people, feeling like a fraud somehow. The picture-perfect vision in my head of novelists lounging in a field of sunflowers, shielded from the blistering sun under a parasol, jotting down a few words when inspiration hit, partaking in cream teas when it didn’t, was not how it was at all. Working as an author has proved to be many things; sometimes exhilarating and satisfying, sometimes, if I’m being honest, isolating and lonely, and always, always extremely hard work. It’s far more involved than I first thought. The time invested in promoting my books both here and internationally (my titles have now been sold for translation to fifteen territories), interviews, social media, blogging, events, replying to reader emails (often the highlight of my day), mentoring female writers (which I offer free through The WoMentoring Project), and of course, juggling writing new stories whilst taking the previous book through the editing process

After The Sister I was nominated for the Goodreads Debut Author of 2016 and then came publication of The Gift. With both my first two books reaching No. 1 in the UK and abroad came a shift in my thinking. Although I still felt like an impostor, afraid it would all disappear in an instant, no longer did I mutter when someone asked what I did for a living. I admitted to being a writer albeit before looking at my shoes and hurriedly changing the subject. Yet, I didn’t quite feel like an author but it was progress of sorts.

It’s been a whirlwind year and often chaotic and I’ve learned a big lesson in time management, in finding that all important balance between work/family life.

The Sister was nominated for a CWA Dagger Award and amazingly after 12 months it is still sitting comfortably in the top 100 in psychological fiction, as is The Gift and now it has been joined by The Surrogate, my forthcoming novel, which is currently available to pre order and will be released in September. I’m so excited about this book, my best so far I think, already it’s made the Top 10 in psychological thrillers and the Top 50 in the overall UK chart. 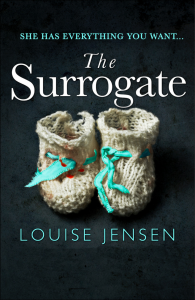 Last week my publishers told me I had achieved 750,000 English language sales (more if you take into account sales in other territories) and the thought of three quarters of a million people reading my books caused another shift in my thinking. At a barbecue last weekend someone asked what I did for a living and for the first time ever I said ‘I’m an author,’ and I didn’t even look at my shoes.

Finally, an author. I’m living my dream and with a head full of stories there is honestly nothing else I’d rather be doing. Every day I think how lucky I am – I’m so grateful for this opportunity.

Huge congratulations to my publisher, Bookouture, who have announced they are now part of Hachette. Exciting times ahead for all!

“I am delighted to announce today that Hachette UK has acquired Bookouture, the UK’s leading ebook specialist publisher.

“In just four years since it was founded, Bookouture has established itself as an outstandingly successful and innovative ebook publisher. Its formidable reputation and enormous success in publishing many bestselling ebook authors, including Angela Marsons, Louise Jensen and Robert Bryndza, whose novel The Girl in the Ice has sold over one million copies, demonstrates that Bookouture probably knows more about selling ebooks than any other publisher in the world. We salute Oliver Rhodes and his colleagues and welcome them warmly to Hachette.

“The acquisition of Bookouture is a landmark event for Hachette UK, demonstrating the scope of our ambition to expand and develop our core publishing business by acquiring the best companies in their field where the fit is right and their ambition matches our own. Bookouture has achieved remarkable things in its short history and, while it will continue as a standalone business, I know that we will mutually enhance and grow our businesses through, where it is appropriate, sharing our expertise and pooling our talents.”

Bookouture will have a special relationship with Little, Brown, which will publish some of Bookouture’s authors in print editions. Oliver Rhodes, CEO of Bookouture, will continue in this role and will also become Digital Publisher of Hachette UK. He will join the board of Hachette UK reporting to David Shelley, CEO of Little, Brown and Orion. In his new dual role Oliver will both continue to run Bookouture and, by steering and advising, also help increase ebook sales across the Hachette UK group.

Bookouture employs 16 people, all of whom will remain with the company, which will continue to be based in its offices in King’s Cross.

“I have long admired the work Oliver has done at Bookouture – he and his colleagues have discovered some amazing authors and have enjoyed extraordinary success with them; they publish with real flair and creativity. I could not be more excited to work with Oliver and his team in taking Bookouture and its authors to the next level, and to have Oliver’s input into Hachette’s digital publishing more generally. I think he will bring something very special to our business.”

“Seeing Bookouture flourish in the past four years has been an incredible and rare privilege – we have an extremely talented and dedicated team and a fantastic group of authors who we are very proud of. What is so exciting about taking this next step and becoming part of Hachette UK is that it will help us to build on the significant momentum we already have and achieve even greater things for our authors.

“Tim and David’s vision for Bookouture within Hachette UK is absolutely everything I would want it to be – supportive, forward-thinking, and ambitious – and that was a key factor in making this decision. To sit alongside the other fantastic publishing houses in the group and work with some of the best people in the business will be a real thrill. I know we’ll learn a great deal from each other and I can’t wait to get started.”