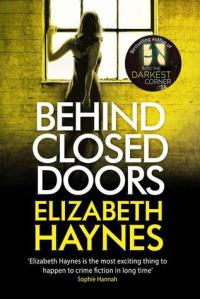 Behind Closed Doors by Elizabeth Haynes, is one of those stories that had me gripped from the opening line, and by the end of the first chapter, I couldn’t put the book down until I’d finished it. It’s an easy read, but not an easy subject matter. Fifteen year old Scarlett Rainsford vanishes during a family holiday in Greece. Was she abducted or did she run away?

This is the second book featuring DCI Lou Smith and her team, but it stands alone well. Don’t be put off if you haven’t read the first. I hadn’t.

When Scarlett is found in a brothel we want to know what happened and this is explained with interspersed, often harrowing, scenes from the past.

This book left me reeling. It is very well written, darker than I’d usually read, and it stayed with me long after I had finished.

Read on for Chapter One and there’s a free copy up for grabs for the first person who re-tweets this post.

To begin with, nothing was certain except her own terror.

Darkness, and stifling heat, so hot that breathing felt like effort, sweat pouring off her so her skin itself became liquid and she thought she would simply melt into a hot puddle of nothing. She tried crying out, screaming, but she could barely hear her own voice above the roar of the engine, the sound of the wheels moving at speed on tarmac. All that did was give her a sore throat. Nobody could hear her.

She tried listening instead, eyes wide with nothing to see. She could hear voices sporadically from somewhere else in the vehicle – two different men – but she didn’t recognise them, nor could she understand what they were saying. She assumed they were speaking in Greek, but the harsh rasp of the words sounded different from the voices she’d heard over the past week at the resort. Lots of ‘th’ sounds, rolled ‘r’s, words ending in ‘a’ and ‘eh’.

Fear came in cycles. The first endless panicky minutes had been very bad: trawling through vague memories of the past few days, trying to identify the mistake she’d made, because this had to be her fault – this can’t be real, I’m dreaming – then the shock realisation that this wasn’t a nightmare, it was really happening. The worst moment of all.

It had been so quick.

She had arrived a bit early at the place where they’d agreed to meet, and she’d been preparing to wait – he’d said he finished work at two – and a van had pulled up beside her. She hadn’t been worried. There were still people around, drunk tourists staggering back up the road towards their hotels. The side door of the van had slid open, and a man got out. He was talking to her, friendly, a smile that showed his teeth. His accent was so strong she couldn’t really tell what he was saying.

But he’d kept yammering on, standing too close to her. She had begun to feel unnerved by it, and something had made her glance to the right, to the gate which led to the Aktira Studios, and in that split second when she’d seen someone she recognised, made eye contact, she had felt something like relief – and then the man had pushed her, a hard shove that sent her sprawling into the back of the van. He’d climbed in after her, slammed the door shut and the van started moving. The man had held her down, put his hand over her mouth, pressing her head into the metal floor so hard that she’d thought her skull was going to burst.

Now, hours since those terrifying first moments, she had reached a plateau brought on by the monotony of driving, the panic overridden by the pain in her arms and legs and the discomfort of being tied hand and foot and having to lie still on the floor of the van. They’d stopped once, very early on, before she’d had time to get over the shock or formulate any plan of escape; by that time the man in the back with her had already tied her up. He got out, leaving her alone, and the van door shut – and they were moving again.

The noise of the engine was unbearably loud; the van would bump and jolt as it went over potholes. Her head ached as a result, sometimes so badly it made her cry. The fear made her cry. Crying made her headache worse, and then it all became pointless, so she would stop for a while and try to sleep in snatches, because sleeping, at least, gave her a brief respite.

And she would dream of him, remember, and wake with tears on her cheeks, thinking, This wasn’t supposed to happen. Then the shock and the fear would kick in, and the whole cycle would begin again.