Last night I was fortunate enough to be invited to a private event hosted by Laura Devine Solicitors (I first met Laura in prison but more of that later) which featured Louise Doughty speaking about her new book, Platform Seven, as well as raising money for The National Literary Trust.

Before I continue I’ll say I was saddened and shocked by the statistics quoted by Fiona Evans who was there representing The National Literary Trust relating to the reading ability of our children. SHOCKED. You can read more about their fabulous work and how you can help here.

Fiona introduced Louise and I settled back with a glass of wine and the most delicious canapés I’ve ever eaten, eager to find out how she approaches novel writing, nine novels in (9!!).

Firstly, Louise publishes a book roughly once every three years but she’s still hard at work in the period between each publication. Currently on a book tour for Platform Seven, she admits that sometimes she wakes up and wonders what city she’s in. The work promoting each book, plus other projects such as her involvement in the TV adaptation of her novel, Apple Tree Yard, has kept her busy but she also spends a lot of time researching each novel before she begins writing. With Platform 7 she spent the night on Peterborough station to see how it felt. Grim, I should imagine.

The thing that interested me most was the way Louise spoke about planning a novel and, being permanently obsessed with how other authors approach the first draft, I did grill her about this afterward, topping her glass up with wine, hoping she’d become so relaxed (drunk) she’d give me the magic formula. But of course, there isn’t one.

Louise says she starts with a rough idea of what the book might be about and makes notes (and like me she can never later read her own handwriting) but for her, the story is all about character. She explained that she feels if she outlined her stories before she began writing them they wouldn’t have that authentic feel. In her (vast) experience she believes that if characters are written to act a certain way to fit a planned plot then the characters may not feel realistic. She cares about the characters she writes, and for her, she lets them lead the way through the story as they naturally evolve. She told me, ‘If I didn’t care about my characters, if they were behaving in a way that didn’t suit the people they had become as the novel progressed, just to suit the story, why would readers care about them?’

Using the character first, plot second approach eventually leads Louise to a point in her book where she has key scenes and chapters and research to use and then she lays it all out before her, and pieces it together like a jigsaw.

This is a method that clearly works for her with her huge success.

Later on that evening, I found myself catching up with Neil Barclay, the librarian of HMP Thameside. I first met him when I eventually visited the prison’s book club after declining his invitation to visit many times due to The Fear, you can read about my visit here.

He’d been following my career since with interest and asked me lots of questions about past and future books. He also asked if I’d go back and teach some creative writing workshops in the prison.

Louise Doughty’s approach to writing the first draft is very different from the approach Sarah Pinborough takes which I learned about last week during an event we did together – you can read about Sarah’s approach here.

Each time I listen to another author, my layers of self-doubt shrink a little. I’m not doing it all wrong. There is no wrong. As writers, it’s trial and error to find the right process for us and that may process may change day-to-day, book-to-book, and that’s okay.

Knowing this, understanding this gives me confidence in the way I work but it doesn’t stop my curiosity into how authors write.  It’s something I will also find fascinating.

Thanks to the always inspirational Laura Devine and her amazing team who are such an incredible support to the literary world and charitable works. 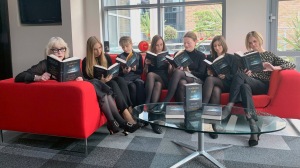