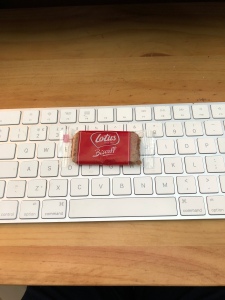 My husband had gone to a client meeting, my son had just left to meet friends when I decided to have a break and make a drink. Back in my study, I put my coffee on my desk and it was then I realised, somebody had been into my room.

But I was alone.

Fear prickled at the back of my neck. On my keyboard, was a Biscoff.

‘Hello?’ I called into the silence which now felt heavy and oppressive.

Grabbing my phone, I called my son.

‘There’s somebody in the house,’ I whispered. ‘They’ve left a warning on my keyboard.’

‘A warning or a biscuit?’ He asked.

‘I found it in my pocket when I got to the bottom of the road and thought I’d pop it back as they’re your favourite. Seriously, mum how could you think it was creepy?’

‘Because somebody could want me to think I’m losing my mind, doubting my reality. They-‘

‘You’ve got an overactive imagination,’ he said.

It’s something I’ve heard throughout my life, usually accompanied by an eye roll and a sigh. My school reports often started with ‘Louise is such a daydreamer.’ I am but now, rather than seeing it as a flaw, as I’ve always been led to believe, I look upon it as something positive. Although gazing out of the window and making up characters in my head may be a problem in many jobs, without my over active imagination I wouldn’t be living out my life-long dream of being an author.

For Mother’s Day, my youngest son bought me a fizzy bath bomb from Lush. We’d not had them before and he wanted to watch as I dropped it into the bath. Just before I let it go he said ‘look mum, there’s a secret message!’

Inside a small hole on the top of the bomb there was a tightly rolled piece of paper.

‘What do you think it says?’ he asked excitedly.

‘I think it says ‘drown, bitch,’ I said. ‘I don’t think it’s supposed to be revealed until you’re in the bath and as you stare in confusion at the words you become aware of someone standing behind you-‘

‘Which pushes you underwater and holds you down until you stop struggling.’

The disappointment when we read it said ‘thanks’ was immense. 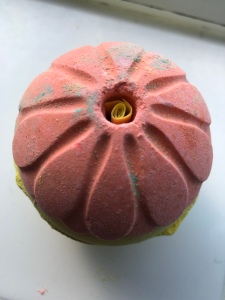 My three sons are used to me now. One called me to tell me he’d lost his wallet he quickly followed it up with ‘and no I don’t think anyone will find it and leave my ID at a murder scene.’

Last weekend, we took our dog for a country walk and my son pointed out the perfect place to hide a body. I didn’t roll my eyes and sigh, tell him he’s got an overactive imagination as though it’s a bad thing. Instead, I encouraged him to explore the idea, write it down. If all potential story-tellers were made to feel having a vivid imagination is a bad thing there wouldn’t be as many books and that would be a very sad world indeed.

12 thoughts on “Where do story ideas come from? Everywhere…”