It’s been seven days now since I decided to overhaul my diet and attempt to eliminate sugar and you can read my post on why here.

During this time almost everyone I’ve mentioned it to, on-line and off, has an opinion on the right approach so let’s get that bit out of the way first. There is no right approach. Instead, there’s the approach that seems achievable for you and your family, whether that’s cutting out sugary snacks, processed food or eliminating the white stuff entirely. I’m not an expert. This isn’t a post with ‘rules’ but rather a sharing of what I’ve found helpful, the challenges I’ve faced and how I overcame them (or not).

By day one I was raring to go. After much research (there’s an awful lot of information out there and a lot of it contradictory) I decided to base my experiment on David Gillespie’s method. His Sweet Poison book explained the science simply and clearly. I bought this book along with The Sweet Poison Quit plan but to be honest you could get away with only reading The Quit Plan because it explains the science (although not quite as in-depth) and also has recipes and pointers.

In his plan carbs are not banned – hurrah – (although white pasta, bread and rice are) and the occasional glass of wine is allowed. The odd potato will not send you straight to hell which was very good news for my husband when it came to our Sunday roast. And fruit is allowed (although no more than 2 pieces and berries are favoured).

Planning is the key to such a dramatic lifestyle change. Often, I’m working on ‘one more chapter’ and I lose track of time only to hare around to M & S to buy something I can shove in the oven. There is literally nothing without sugar you can just shove in the oven so meals were carefully thought out, and the fridge stocked.

Much of my meal plan was based around Sarah Flower’s The Sugar Free Family Cookbook. Many of the sugar free cookbooks I looked at (and I spent an hour in the bookshop) contain huge amounts of honey, or dried fruit, date paste. These are not sugar free and the huge spikes in fructose WILL leave you hungry. 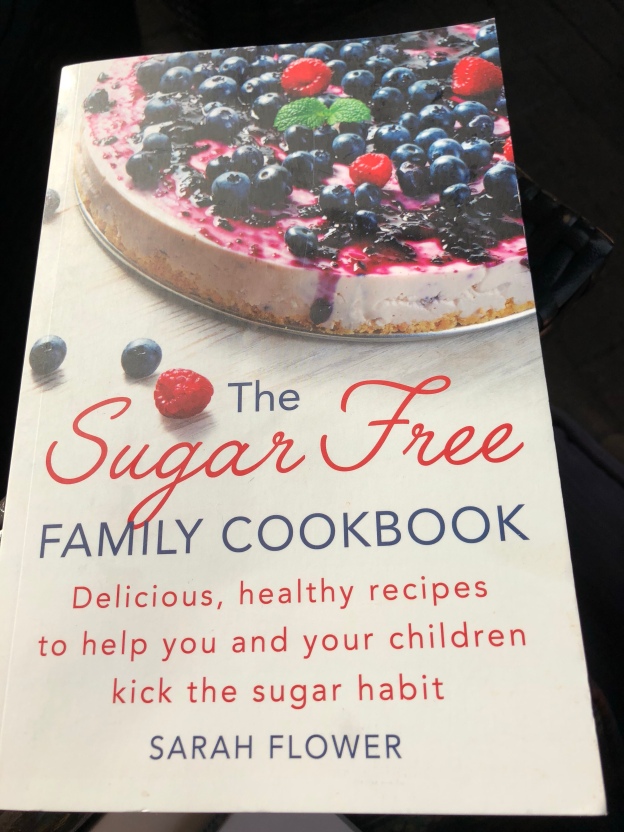 The first day kicked off with porridge with a small amount of blueberries. Lunch was a smoked salmon and avocado salad. I’d already checked the sugar content on my usual low fat salad dressing and was shocked to find out it was 17g per 100ml. This is a LOT of sugar. Instead I drizzled chilli infused garlic oil. I often have salads for lunch and they only generally fill me up for a couple of hours. Without the spike in sugar from salad dressing I wasn’t hungry all afternoon. I’ve found that although sugars are hidden in almost everything dressings and condiments are amongst the worst.

Cooking dinner was, if I’m honest, a little frightening. I made moussaka which is one of my husband’s favourites. For years I’ve followed the Weight Watcher’s recipe. Low fat yoghurt and cheese. The Sarah Flower’s method was alien to me. Frying the aubergine in oil. Using full fat cheese and cream. I reminded myself as I sat down to eat that this isn’t a weight loss mission. It’s not about getting slimmer (although it is a bit…) but more about my health. My family loved the food. I couldn’t finish my portion and for the first time, I think ever, I didn’t have the urge to snack in the evening. I was too full. This was a trend that carried on all week – I’ve not once snacked in the evenings. It’s been hard to let go of the emotional comfort my ‘the kids are in bed let’s eat’ ritual brings, I’ve been doing it for years and that’s been one of the hardest things to change.

On day two I took my son for a pub lunch. The salads on the menu didn’t look too inspiring and it’s what I usually eat at home so I went with a steak and a handful of chips. (If you’re rolling your eyes at chips please refer to above about making changes that are realistic and feasible and hey there’s no added sugar). It was hard resisting the ketchup and vinegar but again I struggled to finish. We always have desserts and even though I thought I’d opt for cheese I just wasn’t hungry. It was 7 o’ clock before I realised I had skipped dinner. I was still full but I thought I’d better eat. I cut some crudités, cheese and spooned a small amount of homous onto a plate. Homous is something I eat regularly, again usually low fat. It was shocking comparing the labels and realising how much sugar is in low fat foods. No wonder dieters always feel ravenous with the fructose spikes making it impossible to know when they’ve eaten enough.

Day three brought with it a weird stabbing pain in my forehead that just wouldn’t go. Again, I ate out with friends but there was nothing suitable on the menu. I asked the kitchen to grill me some chicken and serve with an undressed salad (don’t be afraid to ask for what you want). Uninspired, but my head hurt too much to eat.  For dinner I wanted to try Sarah Flower’s ‘hot head’ pizza but discovered although I’d bought all the ingredients the base sauce took 8 hours to cook. I chucked everything in a slow cooker and left overnight to have tomorrow. Instead we had ratatouille with halloumi but even my favourite squeaky cheese didn’t make me feel any better.

Day four my head still hurt and I barely had the energy to get out of bed. Usually I’d go for a swim but it was exhausting just getting dressed. The sauce for the pizza was ready so I made the bases, almost entirely of cheese. If I’m not the size of a house by the end of this experiment I’ll be amazed. (It’s not about weight. It’s not about weight). I told the kids over and over again that they wouldn’t taste like real pizza’s until they said I was ruining it for them before they’d even tried them. Unanimously we all agreed we liked them better than regular pizza’s and even though I’d made one each they were so filling we could easily have shared.

Day five and the weird stabbing pain was still in my head. I’d been longing to write book 5 but my focus was non-existent. I was so tired I could cry. I had to run some errands and outside of the house I felt increasingly anxious until I had a panic attack. Panic attacks, I’d hoped were part of my dim and distant path and I drove home wondering whether this was all worth it. For dinner I made a curry. Again, I’d been making weight watchers curry recipes for years but this one had oils and creams and my family said it was the best curry they’d ever tasted. 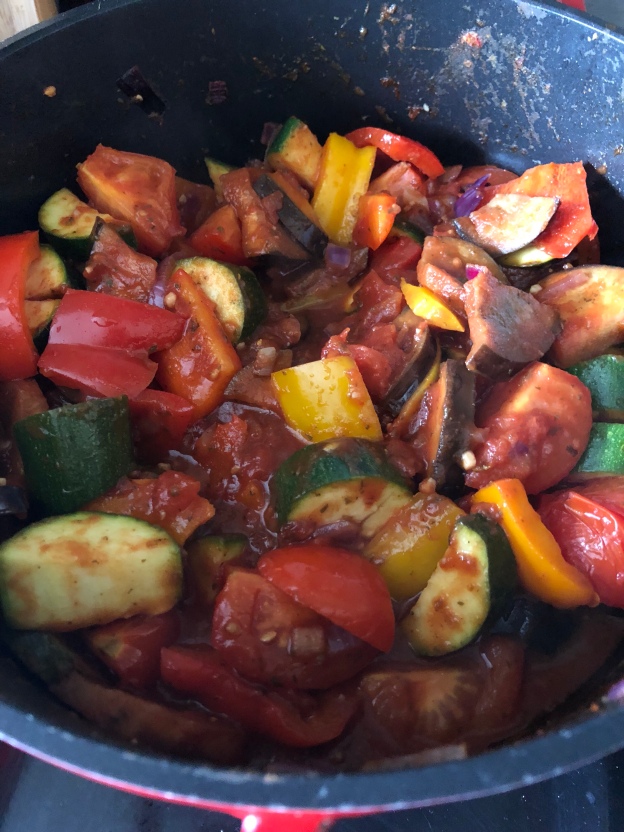 Day six and I woke to find my hands didn’t hurt quite as much as they normally did. The point of this dietary change for me is to try and reduce my inflammation, as well as boost my energy (ha! No change there yet). I tried to write but although I couldn’t concentrate my fingers moved freely.  My 4th psychological thriller, The Date, is newly published & I’ve spent more time than usual on social media, on my phone. This is usually agonising for my poor hands. Hearteningly, already less so. My kids wanted burgers for dinner and so I made them from scratch. They’d never go without ketchup and so I found a recipe here and made some. It only took half an hour and we all agreed was nicer than Heinz. Cheeringly, I think it would make a fabulous base for the pizzas so no more 8 hour prep – hurrah. It’s Saturday and we generally eat desserts at the weekend so I made a raspberry mousse from Sarah Flowers and it was delicious. 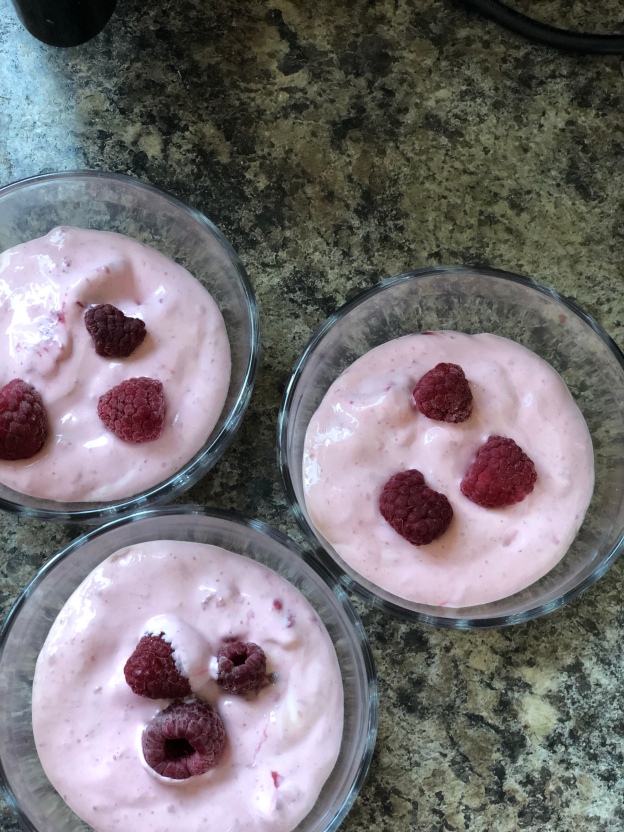 Day seven. My headache had gone, my pain less and today I felt more energetic than I had for ages (probably because it was the first time I’d slept properly all week). I nervously weighed myself (I’d eaten so much fat this week) and was surprised and relieved to see I’d remained the same. Somehow I’ve lost an inch from my waist and my stomach is noticeably flatter, my clothes looser.

My husband’s had been missing sweet snacks and so I baked a sugar free lemon drizzle cake, again from Sarah’s recipes. Again, I kept telling my family it wouldn’t taste like cake but surprisingly it did. It was light, moist and disappeared VERY quickly.

It’s been tough, I think the exhaustion has been the worst, but it’s encouraging to see a reduction in my pain already. I’m looking forward to the week ahead. I’ll keep you posted!

Below are my two favourite recipes from this week.

75g erythritol blend (I bought mine from Amazon. Expensive but you don’t need much at one time)

40g coconut flour (I sourced mine at Asda)

Sarah shares a method but I just chucked everything in my Magimix and blitzed for 30/60 seconds. I used a silicone loaf tin and baked on gas mark 3 (170) for 50 minutes. Drizzle over the lemon juice once out the oven (I didn’t quite use all my juice). Let it cool before you turn it out or it will crumble.

This invaluable recipe for ketchup (also a pizza base – hurrah) is from Sugar Free Londoner fabulous blog which you can find here.

Throw everything in a pan on a low heat for 30 minutes, stirring frequently until it thickens. It keeps in the fridge for about a week.

You can check out how I get on during my second week here.