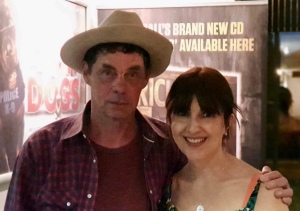 Rich Hall is one of my favourite comedians. Alongside stand-up he’s a firm fixture on TV panels shows, especially QI. In 2000 he won the Perrier Award at the Edinburgh Fringe in the guise of his country singing ex-con uncle Otis Lee Crenshaw.  This week I was lucky enough to see him live where he combined comedy and music in a show that was so funny my stomach muscles still ache from laughing.  During the first half he talked in his trademark drawl, taking an interest in the audience, randomly asking people where they were from, how long they’d been married and what they did for a living.  The second half kicked off with Rich singing a song based around an audience member’s life. I was utterly in awe of how quickly he’d pulled the song together over the interval and my writer mind instantly questioned, how had he done it? As time marched on he sang song after song using new information about different people and I knew these hadn’t been pre-written. How did he, seemingly easily, come up with ideas.

At the end of the show I asked if I could ask Rich directly and blog about his process. Thankfully he said yes.

Rich, I’m in awe of the way you put songs together so effortlessly tonight.

Thanks it’s not always as effortless as it appears.

I thought you’d used the interval to write the first song you sang in the second half but then you carried on singing about audience members. You must make them up on the spot?

Not entirely. The interval helps, trust me. In the interval I’ve got a bit of information to work with. I don’t know what I’m gonna do with it but at least I know. I knew that guy drove a mini metro and I could think about it.  I guess it’s a little like you planning books?

I tend to wing it!

Hehe I wing it too but even then I’m thinking ahead wondering what could come next. Sometimes shows are shorter without an interval and then the pressure’s really on but some writer’s work better under pressure. You one of those?

God no! I don’t like too much pressure but I’m beginning to think I’m better with a deadline of some sort. I don’t have one at the moment.

Yeah sometimes it stems creativity having to produce something. It sucks the life out of it. But sometimes you need that kick up the arse.

A couple of the songs you sang tonight I’d heard before. How do you approach song writing?

Often I work on the structure first and then I sit and teach the band – here’s what I want you to play – then we’ve got a good feel for it and I fill in the words. It comes easier with experience. Writing is writing whatever it is. Practice definitely helps.

How long have you been writing?

Thirty five years now. I studied journalism at college and then went to work for the Seattle newspaper writing columns. I hated it. I’d always wanted to be a comedian. One day I just decided to go for it.

It’s not only jokes and songs you write is it?

No there’s plays, books and documentaries. All sorts.

Do you write on the road? Are you structured with your approach?

If inspiration hits I’ll write. I split my time between the UK and my ranch in Montana and I tend to do a lot of writing there.

Do you have any rituals?

I wish I did. I wish it was like a tap that I could do something and it would come. Sometimes I get really stuck, don’t you?

I do but I tend to only work on one project at a time so I have to work through it somehow. What do you do?

I walk away. Writing’s pretty much the same, jokes, stories, whatever and sometimes you have to walk away from it.

If you could give one piece of advice to new writers, what would it be?

When you get an idea you know in your gut if it’s a good one and if it is don’t beat it into the ground. If it doesn’t flow and you force yourself to keep working on it you lose confidence in the idea and it becomes old. You’re a writer, Louise. You know what I’m talking about?

Absolutely. I’ve had to put the manuscript for my latest novel, The Date, away so many times because it wasn’t coming and I knew it was too good an idea to let go.

Yeah that’s the thing. You give something space and it could be good.  If you’re sick of thinking about it let it go for a while. That’s what I learned. I was very frustrated when I started out because I thought I had to sit and work on something until it was finished.  Sometimes you’ve got to mix it up. What gets you through the hump?

A mixture of pure panic, cheese and too much wine.

It’s been lovely talking to you Rich. Thanks so much for your time.

It’s been a pleasure.